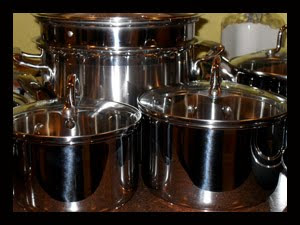 Yesterday I said that I was a woman on a mission. A mission to buy new pans. I haven't had new pans in years and I was finally ready. I was tired of things sticking to my "non-stick" cookware, tired of having only one skillet to cook everything in....I just wanted something new. I had stewed over it for the past month trying to decide what I wanted and decided to just go for it and get them now or it might be never.
So my plan was this; 1) drop the girls off at a birthday party at 1:00 2) Head to town to look until I had to pick them up at 5:00.
Then hubby walked in the door and announced... "I have a spontaneous plan". "Uh-oh" I thought...what could this plan be. "I'll take Kat to her soccer game in Portland, then to lunch at Red Robin and you and Nan can meet us at the party and then you and I can spend the afternoon together." That was his plan. Great plan except for one thing...if you've ever shopped with my hubby, which you haven't, you would know that he likes to go all over the place and spend lots of time looking at certain stores and sometimes we don't get to the stores we really want to go to. He likes to multi-task and get alot done. I looked at him point blank and said "the only way I'm spending the afternoon with you is if the only thing we do is shop for pans...this is not about you...it's about me....I'm buying pans today!!!!" I said it lovingly and somewhat jokingly, but I was serious. That was my mission and my plan and I was sticking to it. So when we finally met up at the party we headed out (after dropping one vehicle off at Les Schwab to have tires rotated...it would have been two but I gave him the look and he conceded). The adventure began... 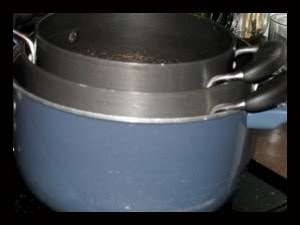 First off, these are my old pans. The large blue one on the bottom is from when we first got married 17 years ago...it's dead! The rest are from a set I got about 6 years ago. 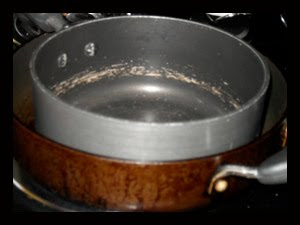 Yah....they are in sad shape
It actually didn't take as long as it could have (I admit if I had been on my own I would have went to a million stores and stewed over them and then probably decided they were too much). But because I went shopping with hubby (has its perks) and he knew exactly what we could spend I found what I wanted in two stores! And I'm happy with my decision. Let me introduce you: 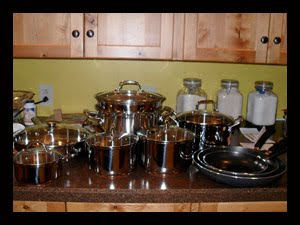 From Costco I purchased the three non-stick skillets, great for pancakes, eggs and whatever else. I also purchased the large pot in the back and also pictured below. It's an 8qt. multi-purpose cooker. Love it....Saturday night I made a pot full of meat sauce for my lasagnas ( I was making three and it required a lot of sauce) that I was making on Sunday morning. Then we headed off to Ross where I bought the remainder of my pans. I bought a Wolfgang Puck 11" chicken fryer, which will be used for purposes other than frying chickens. I also bought a Cuisinart 5qt saucepan, and 3 Potobelo Italia saucepans in 1-2-3qt. sizes. I'm so happy with them all. 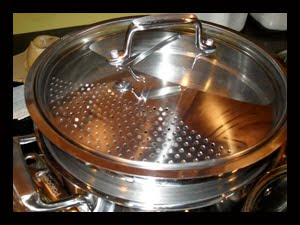 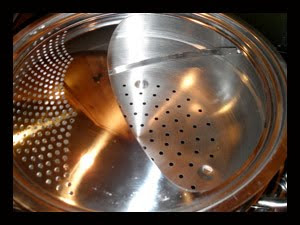 This multi-purpose cooker is awesome. It has a steamer basket so you can steam a veggie while cooking, say, pasta. It also has a lock and drain lid to drain the water from pasta, or grease from meat. Love it! 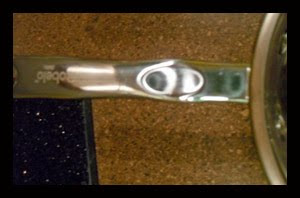 The Potobelo pans have this nifty indent that fits perfect for your thumb when lifting or holding onto the pan. The only pans I'd still like to get are a crepe pan and a cast iron skillet. I'm looking forward to many cooking adventures with these new pans. I decided to buy individually instead of in a set so that I could get exactly the pans I wanted. I can't wait to continue cooking with these wonderful pans. We finished with two hours to spare before needing to pick up our girls so we went and test drove a 2007 Toyota Sequoia....I drooled, I dreamed, I sighed...I really want one! It will take a supernatural, miraculous intervention however for that to happen! Good thing I believe in supernatural, miraculous intervention!! With Joy UNquenchable,