Weekend Coffee Share.....Come sit with me! 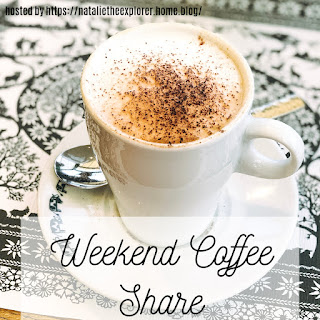 It's another week of Weekend Coffee Share. I always love everyone's posts. Are you like me and try to visit everyone? It doesn't always happen but I try.
It's been awhile since I posted ( I think December 11th). Life got a bit crazy and as much as I wanted to post, I just needed to not put that pressure on myself. But I'm glad to be back at it (I hope).
If we were having coffee we'd probably talk about:
The weather: The weather the last week has been all over the place. Christmas night we started getting snow. By Monday morning we had 6" and I missed 2 1/2 days of work. I loved it, but felt so bad about not being able to get into work. Then it turned to rain. Now there is terrible flooding going on but also in many areas of Washington, record snowfall, which will eventually melt, probably causing more flooding. It's just crazy.
What we're thinking about: I'm ready for this year and what it will hold. I'm not one who usually says "well, thank God that year is over". We never know what each year will hold. There's going to be good, there's going to be bad, we just have to roll with each as it comes and do what we need to do to land on our feet. So here's to 2022 and all that it holds. I've also been thinking about my word of the year and what it's going to look like, or what I'd like it to look like. The word is "UNFOLD"
What we're thankful for: Lessons learned, the people who are in my life and walked with me throughout the year. I'm thankful for continued health. So thankful for my grandkiddos who just make life so fun and sweet. I'm thankful for the opportunity to walk into another year.

What we're reading or want to read: I just started a new book from my Shelfrighteous Book Box, "How The Penguins Saved Veronica". I finally finished my three other books over the Christmas, New Years, Snow breaks from work. That felt like such an accomplishment. I also started the "Lovely" book by Jenn Johnson. It's a great read. Also started a new Kindle book called "Dead Wrong: A Cozy Mystery (Agatha's Amish B & B Book 1). My Goodreads goal for the year is 24 books. I'm trying to keep it realistic but hopefully I'll get more than that read.
Around the house: We've gotten quite a bit done since I last posted. Trim is almost completely done, shiplap is going up, carpet is done in master bedroom. Cabinet hardware is on. Backsplash is done in new kitchen and we added it to the current kitchen. Next up is getting shiplap done and painted, and hopefully propane stove installed. 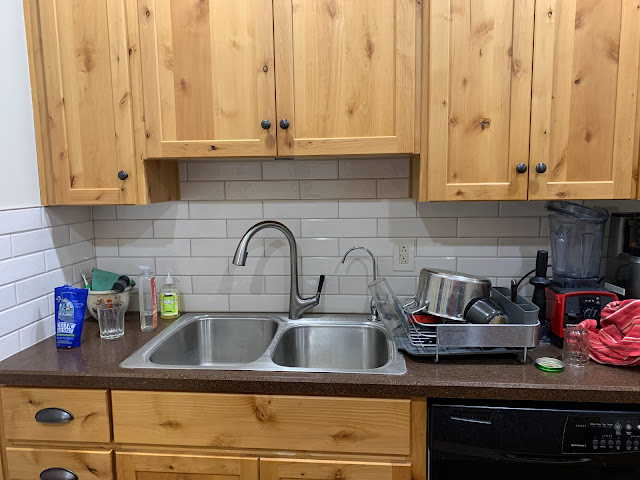 Current kitchen with new backsplash. LOVE it. We keep asking ourselves why we waited so long, and my children wonder WHY I painted our kitchen yellow and green originally. Haha! 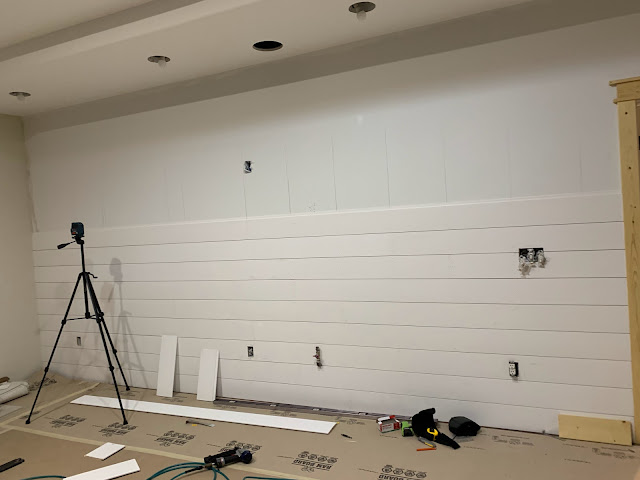 Shiplap wall. It will be painted a dark green. The propane stove will go against this wall. 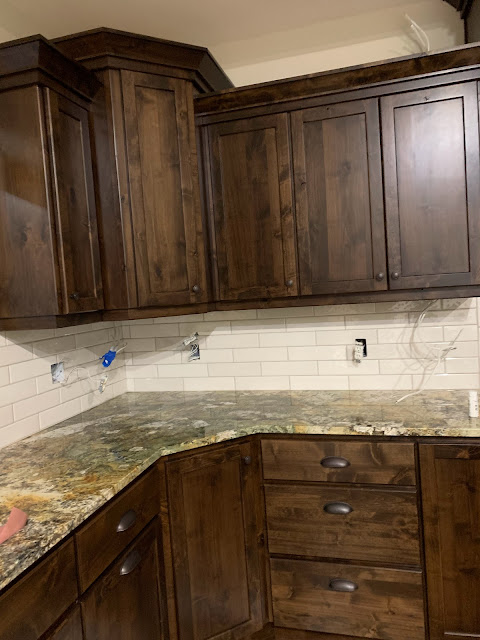 We kept the hardware in the kitchen pretty subtle. We were thinking of doing the same hardware we put in master bath but I think it would've been way too much contrast. I'm so excited to figure out to organize this space. 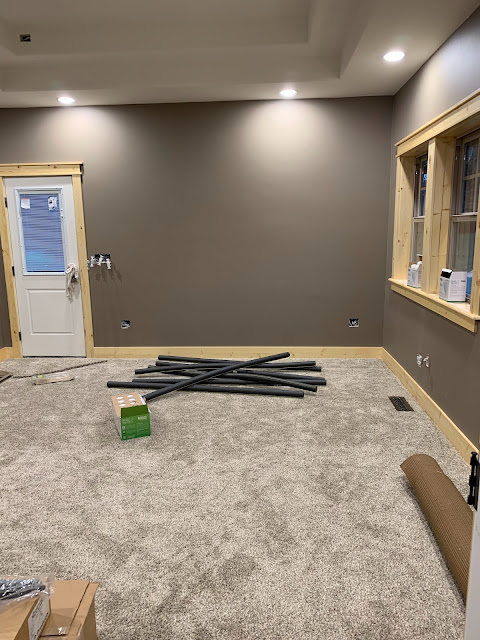 Loving how the carpet turned out in master. It's all coming together nicely. 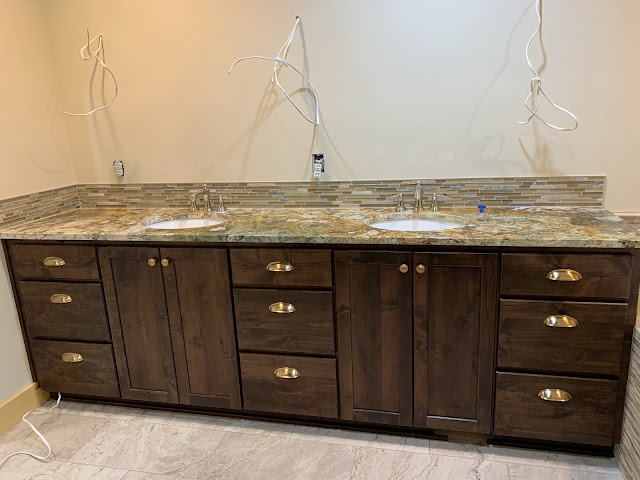 Bathroom hardware. It's so pretty and accents with everything else so well.

I did do (and have done in the past) a video tour on my IG page if you'd like to check it/them out. Kirsteemarie (Kirstin Troyer)
From the kitchen: Over Christmas I did make some Caramel Corn and Italian Sprinkle cookies. Christmas Eve we did Clam chowder in bread bowls and Christmas Morning was cinnamon rolls and bacon. We've done a lot of soups. A few new recipes I tried were Taco Cauliflower rice casserole and Asian chicken salad. Both were good. My daughter is going to be doing a Daniel Fast so I have a few new recipes I'm going to try making. I'll let you know how they turn out. 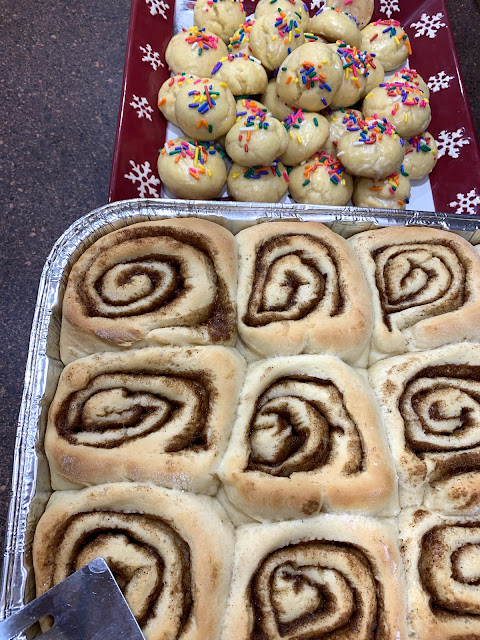 I made dairy free cinnamon rolls this year since grandkids can't do dairy and they turned out great. 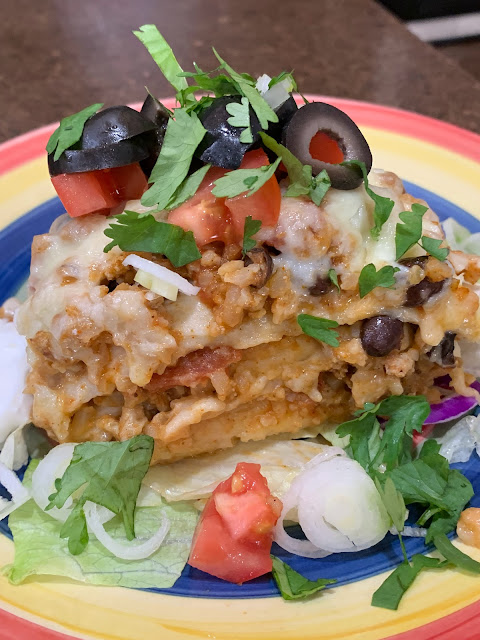 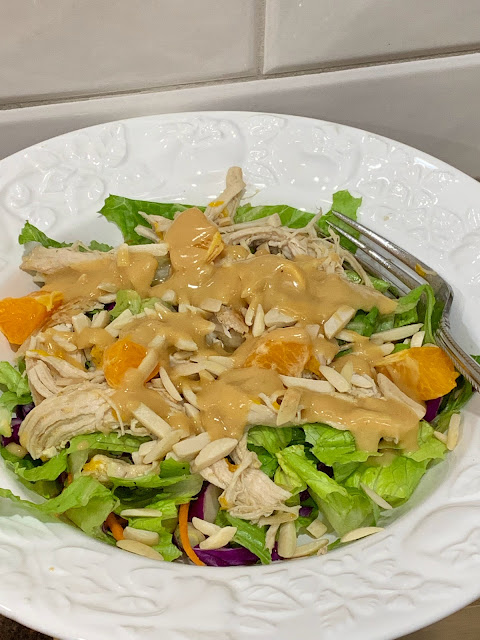 Asian chicken salad, yummy too!!! I just wish I could get nice tender meat from the chicken breasts...the struggle is real.
Favorite photo(s) from the week: 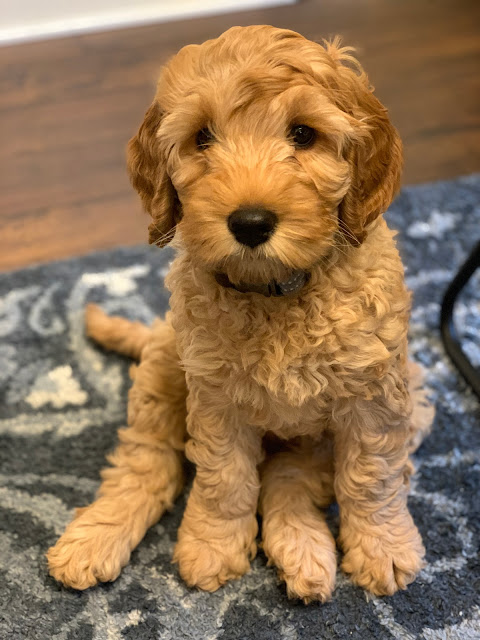 My daughter and son in law got a new puppy. Her name is Ginger and she is an Australian Labradoodle. She is so cute, but definitely a puppy. I babysit on Wednesdays and joked that I babysat two babies and a toddler. I was tired. But she'll be great once she's fully trained.
Random thoughts: I feel like there's so much that happened between December 11th and today. I'll try and keep it short. We watched our grandkids for 5 days while my daughter and her hubby were in Florida at a conference. WOW, I was pooped by the end. It was the first time our grand daughter had been away from mom and dad and she was glued to my side. But it went good. That was right before Christmas so I needed to make sure I was pretty well prepped because I knew there wouldn't be much time to do it much of anything once they were here.
Christmas was nice. It's so fun with little ones. It was sad not getting to call my dad and I didn't hear from my sister or her family at all. We went to a Christmas Eve service, and then home for clam chowder. The next morning was typical cinnamon rolls and bacon, opening presents at our house before heading to the inlaws for lunch and more presents. I realized I didn't take as many photos, but more video. 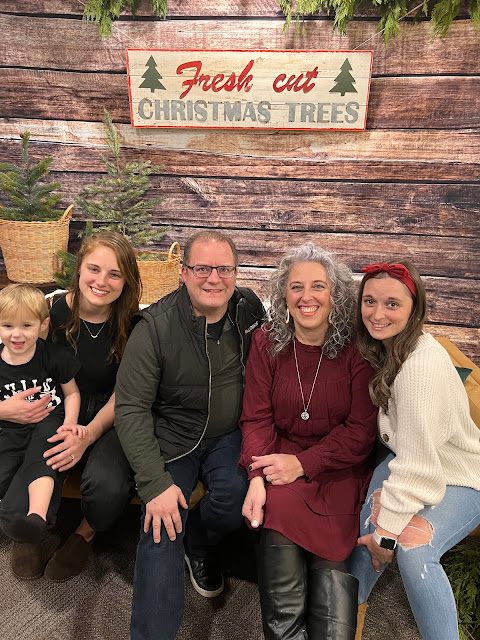 Missing son in law and grand daughter in the photo above. 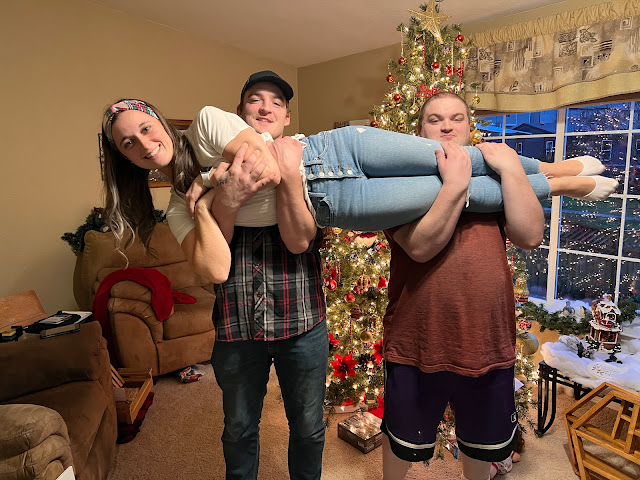 We did this traditional photo of my nephews holding my youngest daughter. We started this jokingly in 2009 and it's continued on every year. 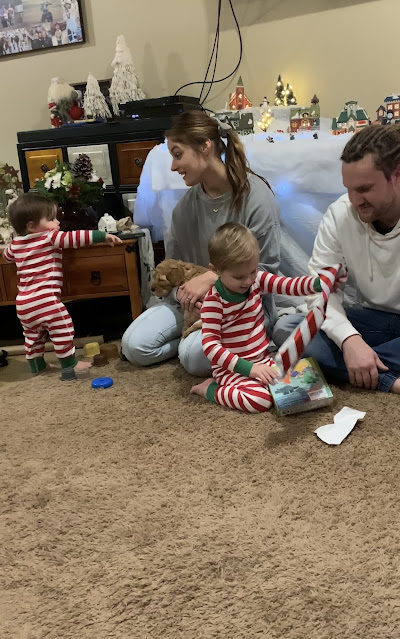 The baby was more into wrapping paper and other things, Indy LOVED everything. He was so fun. 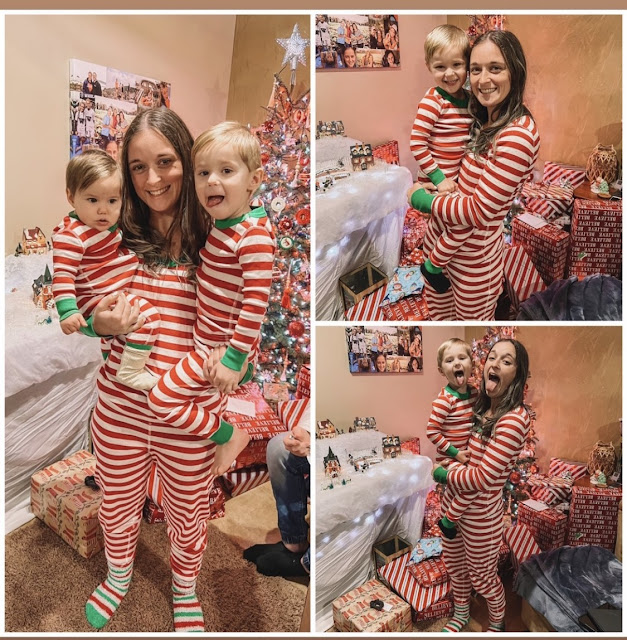 Auntie bought herself and the kiddos matching jammies. So cute.
We got a snow storm starting lightly Christmas night and then gaining momentum. Thankfully I was able to get my grocery shopping done Sunday and when the snow hit Monday, at least we had food. We got 6-8" inches over the next several days. We are on a hill so were pretty much snowed in. Our youngest daughter stayed the night down the hill at her grandparents so she could get to work. It was nice while it lasted. 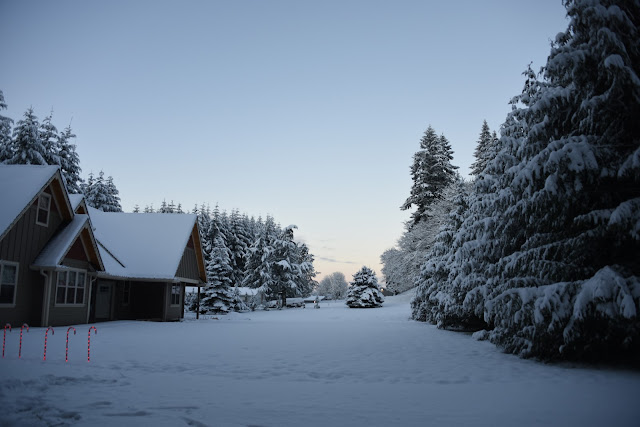 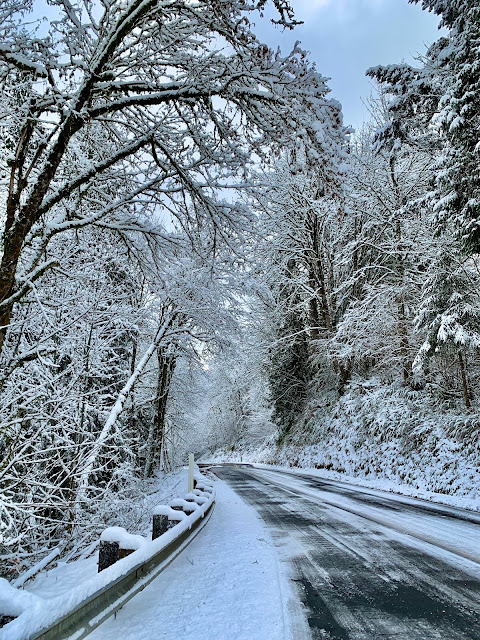 On New Years Day we watched our grand daughter and then went down to my inlaws and enjoyed playing games and eating Raclette. It is a Swiss meal that the Swiss typically enjoy in winter months. Cooked potatoes with melted Raclette cheese and other toppings. It's prepared at the table (except for the potatoes) and each person can cook whatever they want and melt their own cheese on the raclette pan. It's so fun. 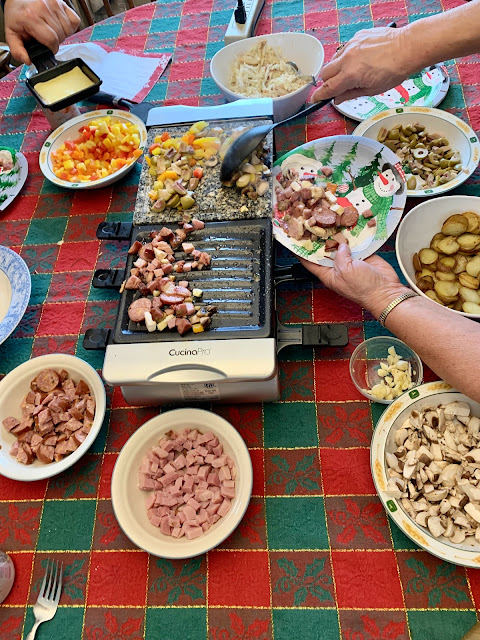 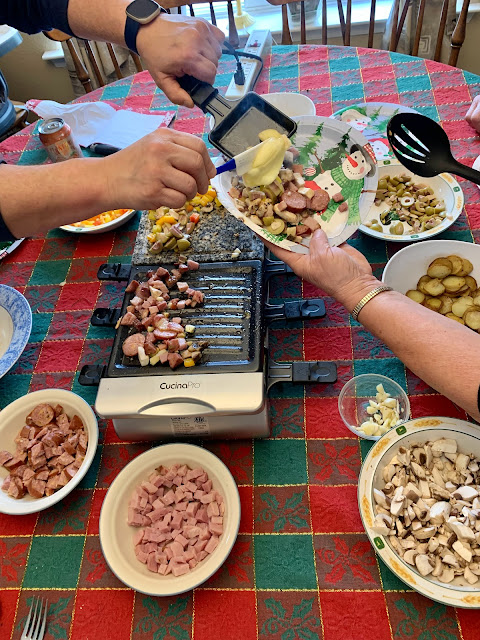 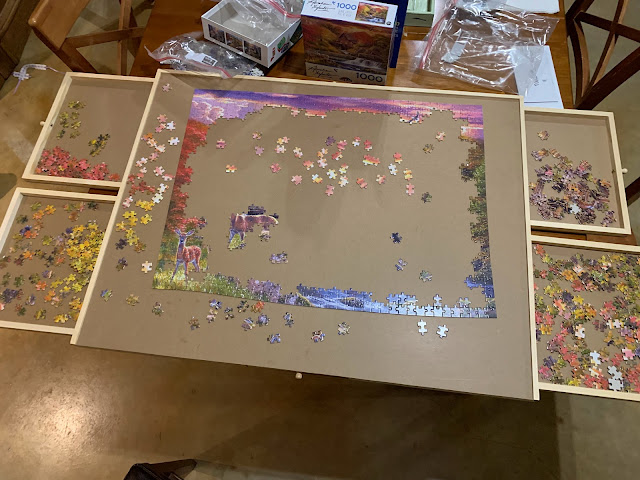 I also bought myself a puzzle table so that I can do puzzles and not leave them out when I can't get them finished. I can just close up the drawers and put it under the couch.
On January 2nd my hubby and our buddy who lives with us were invited to do a polar plunge in our local lake. They asked if I wanted to do it with them. I don't think they expected me to say yes. But I did. And I did it. Brrr. There was still snow on the ground and it was between 32-34 degrees outside. I don't know what the water temperature. I figured "why not start 2022 doing something I would never think to do". 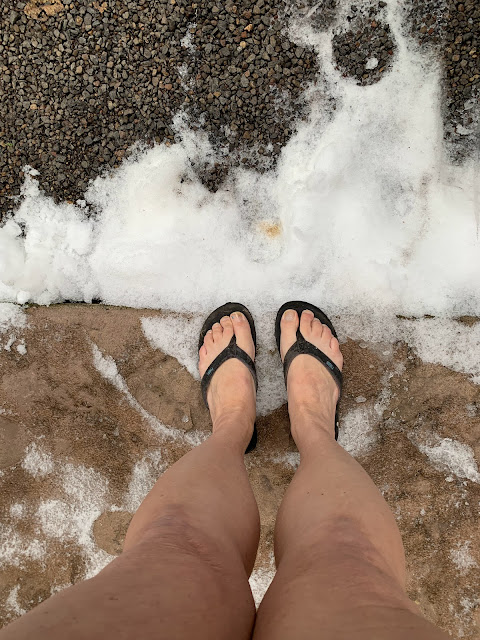 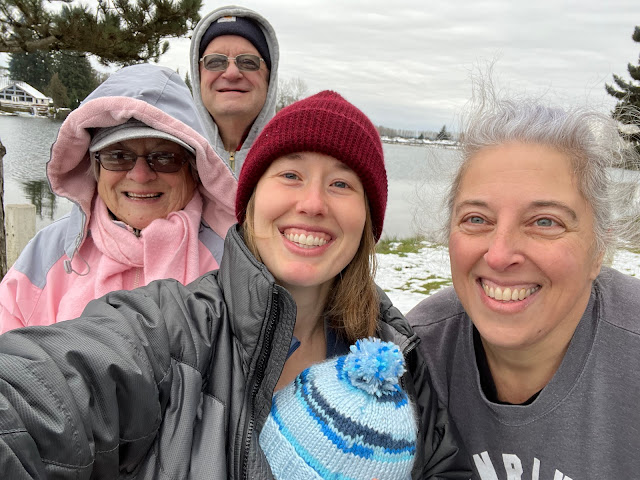 Always great to have a cheering section...my inlaws and one of our friends' wife (he was jumping in as well). 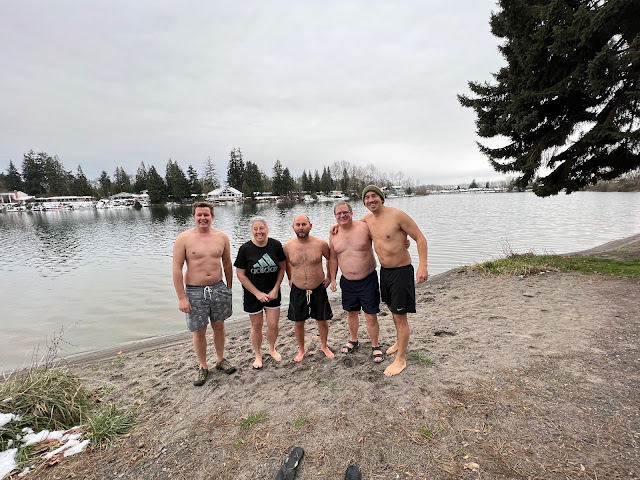 Me and the boys...lol. My hubby is the second in from the right. Our buddy Danny, who lives with us and has done so much work on the house is next to me on the right (looking at photo). I went in, dunked to my chin, paused a few seconds and then came out. They stayed in a bit longer. 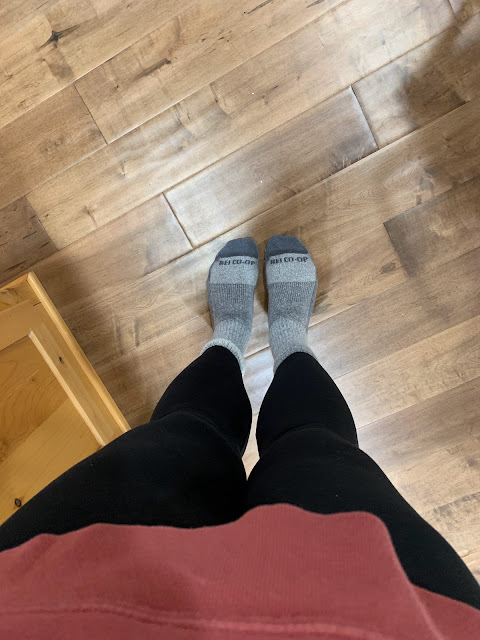 After getting home and taking a nice warm shower.
Check out all the other posts on Weekend Coffee Share, hosted by Natalie the Explorer. I'm off to go visit some now. #weekendcoffeeshare
With Joy Unquenchable,
Kirstin
Email Post