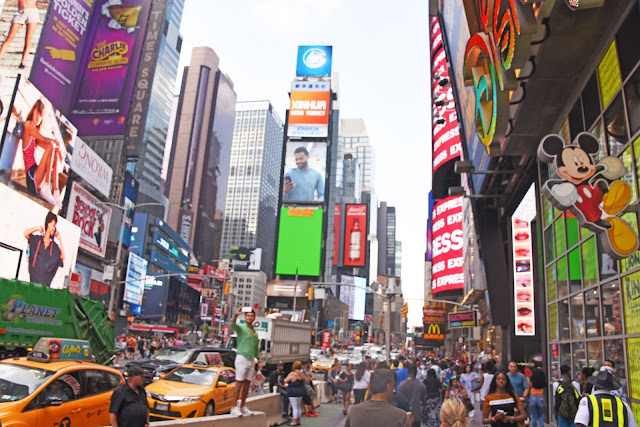 This trip to New York was definitely one for the memory books. With day 1 down, we were feeling a bit more confident. It's hard to remember what we did each day so I find myself going back to my instagram or photos to check dates, which is fun because then I go back and look at all the pics and video. If you want, you can head to my personal FB page and search for New York albums. Kirstin Bozich Troyer.  On day 2 we hit Times Square in the morning, then a little lower in Midtown for awhile and then back up to Times Square that evening. 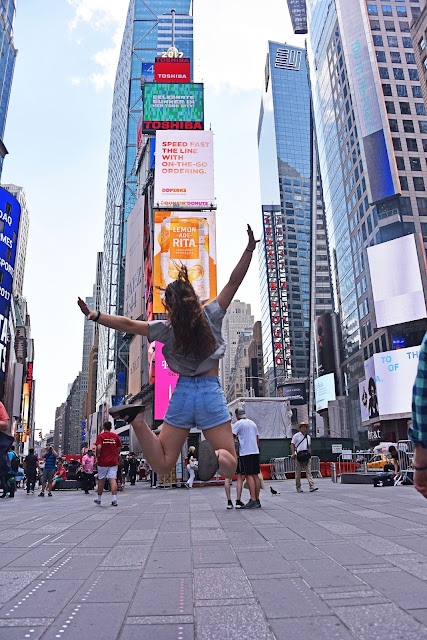 We live close to (about 30 minute drive) from Portland Oregon, and spend a lot of time there. This was like Portland on massive steroids. From the buildings, to the people on the streets. Same issues, same things. Only the streets and sidewalks in NYC are twice as wide and the city not as green (in more ways than one). But still there are homeless on the streets, there are people you know are struggling with mental illness, people so busy going about their business they don't take time to look up and notice everything around them. Portlanders though seem to be much more friendly, or so it seemed, of course that's a generalization and I obviously know there are friendly people in New York. It was just SO big!!! We did find that people in NY are just trying to get to where they are going, though we did find a few who were willing to chat with us and help out when needed. I will say I kind of got tired of saying "no thank you" to vendors, so I guess I can understand the "don't make eye contact, just keep moving" mentality...lol. 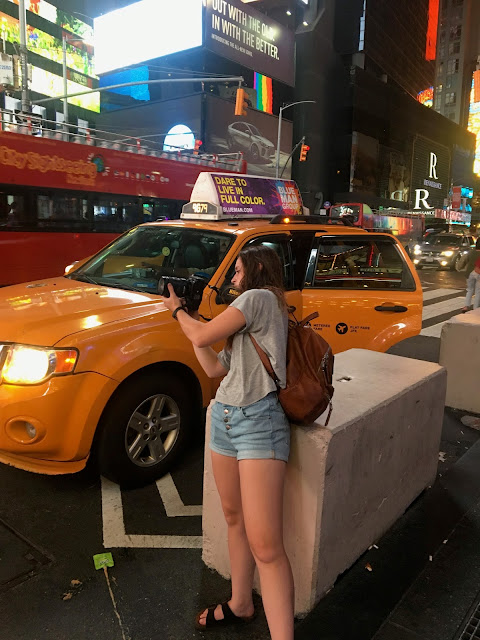 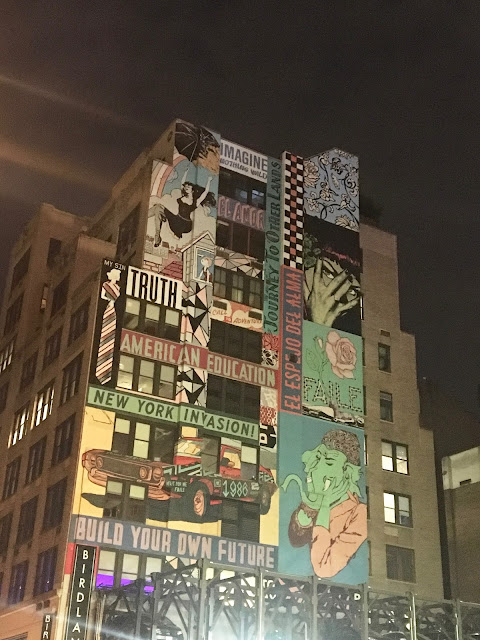 Many people asked us if we were going to go to the top of the Empire State Building, but on the advice of friends, we decided instead to go to the top of the Rockefeller Center so we could SEE the ESB. Great choice. We purchased VIP tickets which were a bit more but it allowed us to bypass lines, etc. We purchased tickets early in the day so we had them for later in the evening. 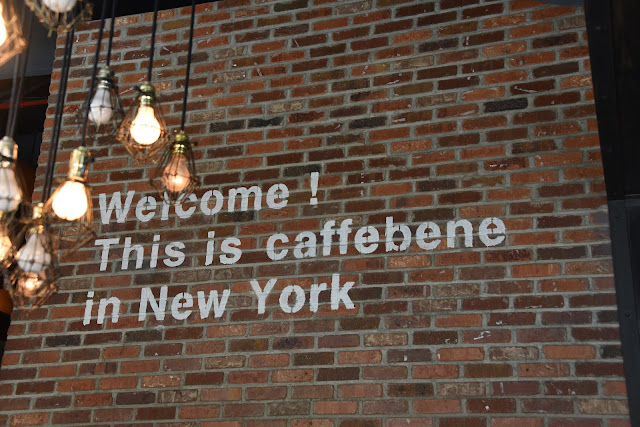 We started our morning out with coffee from Caffe Bene. Great coffee, great pastries, neat vibe, not so friendly customer service. It was more like, "we are busy we don't have time to chat" kind of not friendly, which, okay, I was warned about this, but at least put a smile on, at least look at the customer, at least try to make a wrong order right in a decent amount of time. Once we were fueled we made our way to check off some places on our list. 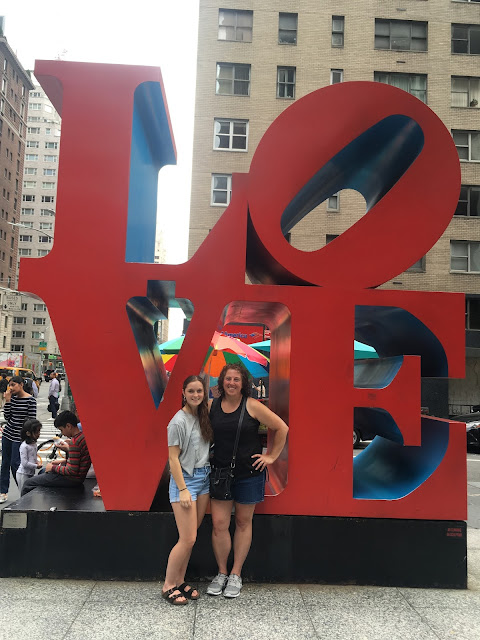 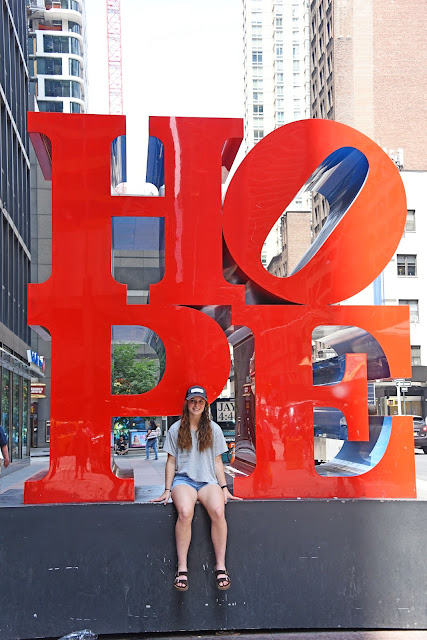 Because of the blisters on my feet from day one, I was loaded up with bandaids and my tennis shoes. It was painful to walk but I just kept pushing through. Each morning and night I had to work on popping the blisters so that I could actually walk (especially the ones on the balls of my feet) and get my shoes on. We joked that if people asked me what I bought in NYC I'd say "water, food and bandaids". 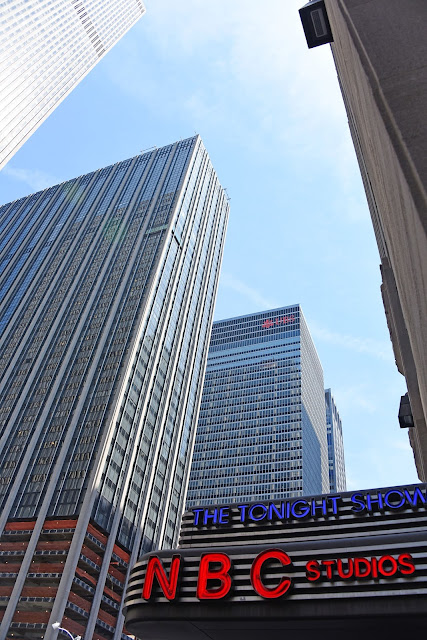 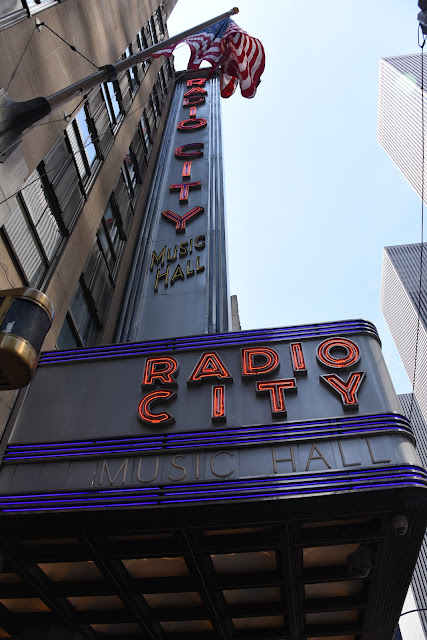 Our first stop was Times Square. We hit the NBC studios and just missed seeing Charlie Puth, but had fun sitting in The Voice chairs, browsing the gift shop and walking around. We also went to Radio City Music Hall. We purchased our VIP tickets to go to the top of The Rock, found the Hope and Love signs (which were on my daughter's list), we wondered if there was a "Faith" one,  and then headed down to Lower Midtown for a few hours. 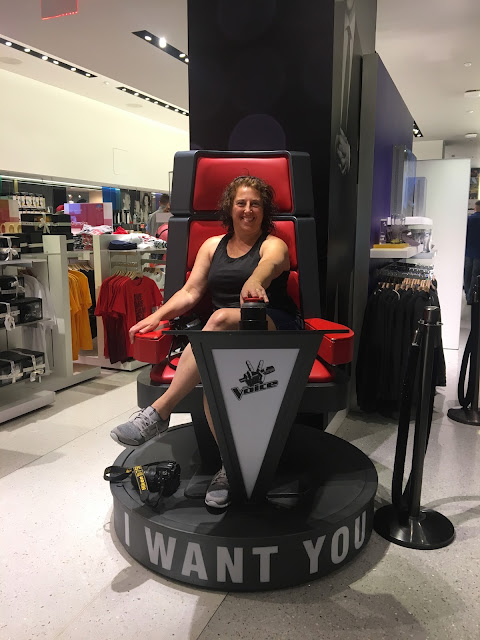 I'm going to give a disclaimer here, in that because it's taken me so long to write these posts, what we did where and when and the locations is running together so I may, or may not get things right or wrong. Bear with me. I'm googling as I go. 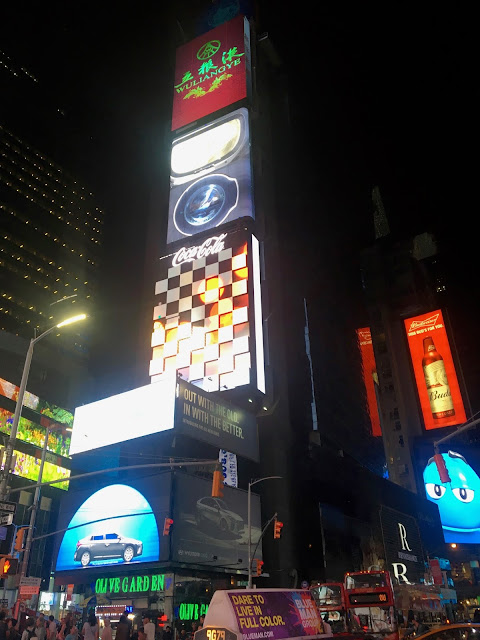 I was excited to randomly see Eataly Caffe so totally had to stop and meander through. Then we found Kleinfelds, where they were currently filming a new season of Say Yes to the Dress. We were able to walk around, take pics at a photo wall, browse their accessory dept. and peek into the showroom. 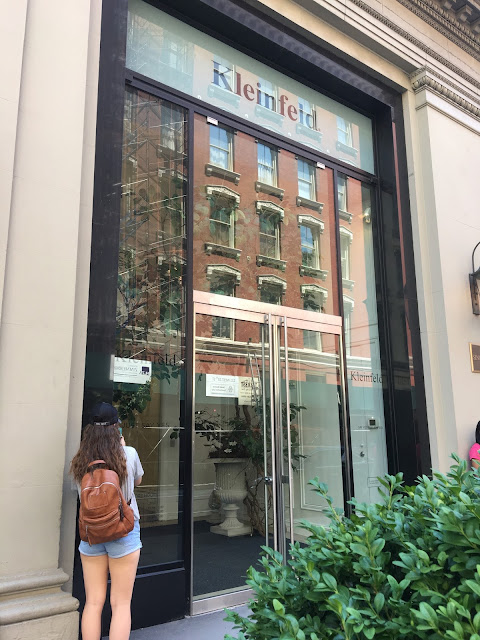 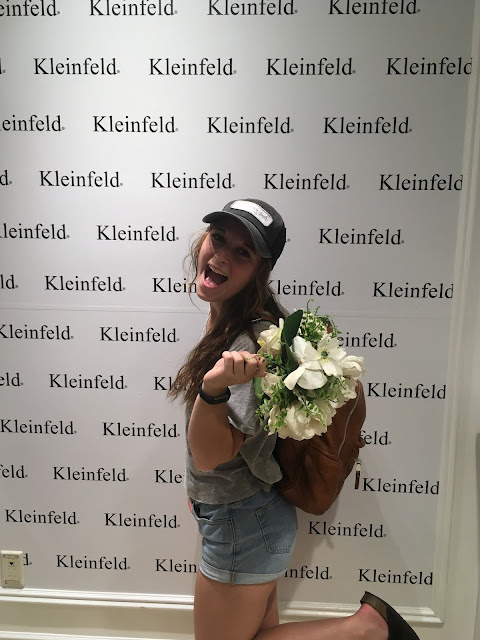 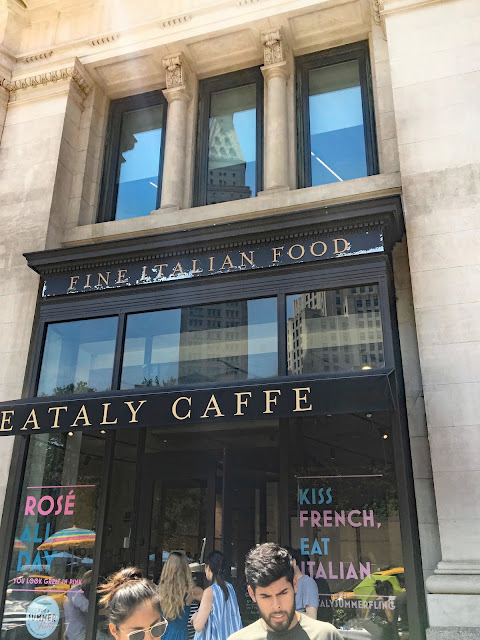 Then we headed back up to Times Square to eat at street carts, play around on some awesome chairs (that after researching found that you too can have for over $700), chilled out by a neat fountain, hung around outside Rockefeller Center before heading up to the top. What a view and I'm so glad we went early and avoided lines because we were able to get a front row view at the top. My recommendation is to do this since you can see the Empire State Building and it was lit up red, white and blue. Once we had our fill there, we headed back into Times Square to enjoy the night life and lit up billboards. It is so crazy the amount of people. We were warned to be careful of our bags, etc...though we never experienced any problems. We just made sure we were always aware of what was happening around us. 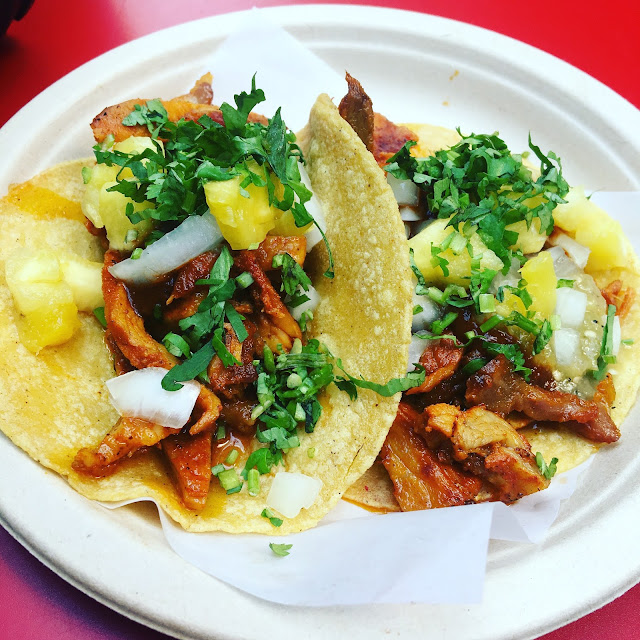 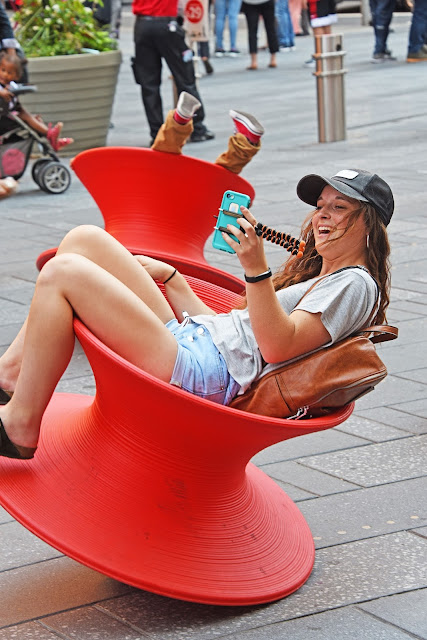 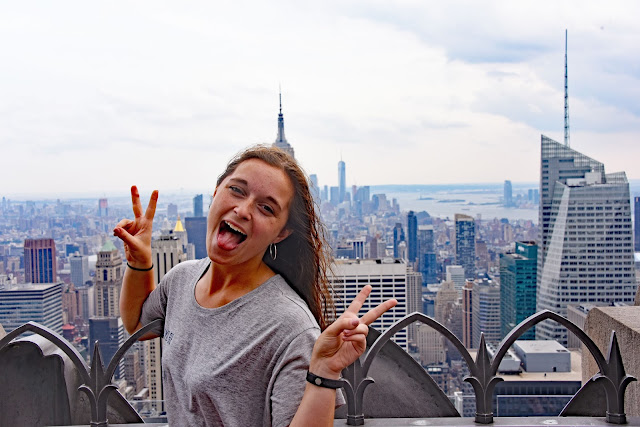 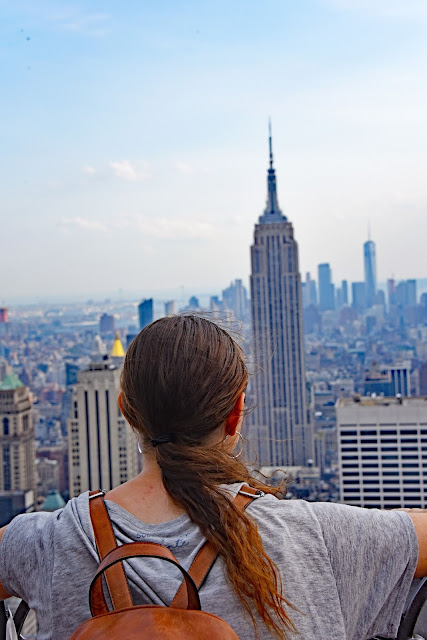 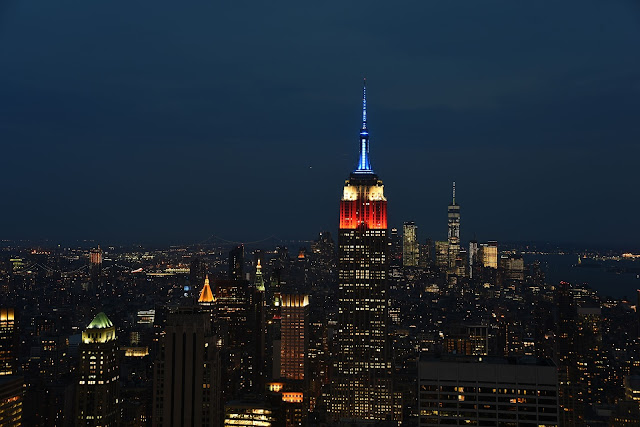 My feet were dead by the end of the day but it was so worth it! Everything we did this day, I would totally do again! And there were things we didn't do that I know we would try to fit in.