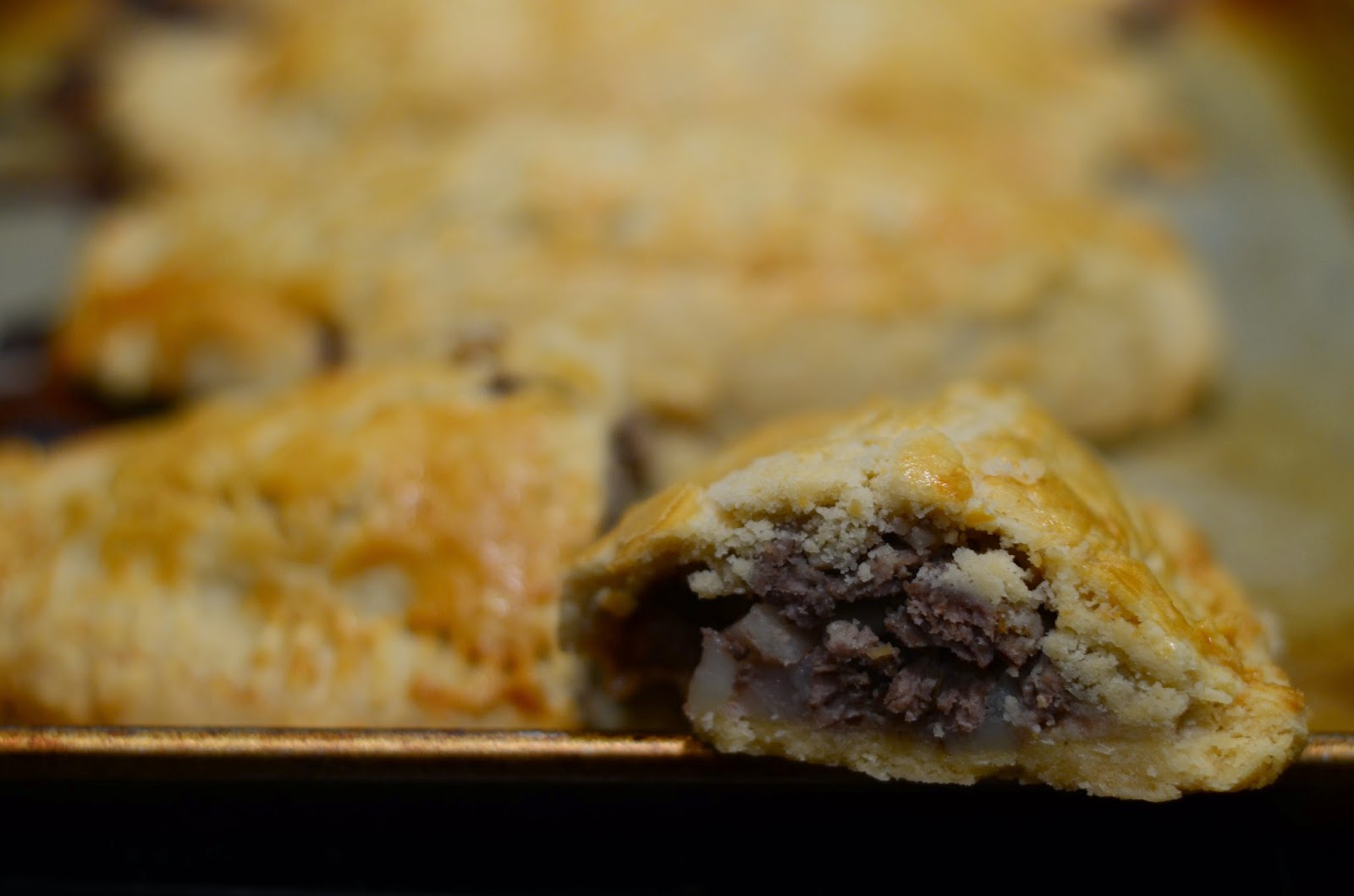 It is that time again, Secret Recipe Club Reveal Day! I love this group(s) of bloggers who reveal amazing recipes every Monday of each month. Groups A-D take a specific week and post recipes from their "secretly assigned blog" on the Monday of that week. It's been a blast. I've had the privilege of being a part for a few years and have found so many new, favorite recipes and blogs. I am always inspired by the recipes people choose to make and usually try to challenge myself a bit when choosing my recipe to make.

This month I was assigned the blog Lavender and Lovage. Karen waAbout Me page.  I just now realized that in her Kitchen Tips section, she has some conversion charts....those would have been handy while trying to "convert" measurements on the recipe I chose. Instead I just googled it.

Karen was born in South Africa then moved back to England where she grew up though she moved several times due to her father's job. She currently divides her time between England and SW France, where most of her time is spent food writing, food styling and photography. How exciting. She is married with one daughter. Her love for food and cooking began at an early age, nurtured by her mother and grandmother. I so enjoyed taking time to discover more about her. Please check out her

Now, a bit of history on why I chose the recipe I did, Annie's Cornish Pasties. Well, first, let me say that I wish my mom was still alive because for a short time my dad was stationed in England (which is where I was born), and I would love to be able to ask my mom about some of the recipes and things they ate while there...not sure my dad would remember. Anyways, about a month ago, I took my youngest daughter to a Portland Timbers Soccer Game (Portland, Oregon's mens MLS team). We were coming directly from her own soccer game and knew we'd be hungry. As we walked through the venue at halftime trying to decide what to have, I saw on one menu "Pasties"...I knew those were a type of "hand pie" and thought "oh, I would love this". I knew they had a European origin and, well, you know how it goes, you have high expectations? Well, I was bummed. I ordered a chicken and broccoli one and the "crust" was a bit soggy and the filling seemed like it was simply frozen broccoli and canned chicken with maybe cream of chicken soup. I remember thinking "I bet I can make these at home". When I received my blog assignment and was browsing recipes I found a few for Pasties...I was so excited and knew immediately that this was what I was making. There were a few others that vied for my attention, but this one won out. Her tomatoes and Twice Baked Potatoes with Cheese and Bacon Gratin . That may still make it to the table at some point.

I was somewhat nervous as I studied her post on these Pasties. First, I had to do a few conversions which were tricky because I'm not the greatest at math and grams don't just convert to cups, so had to go ounces, then cups, which I know, is probably a no-brainer for most of you, but it takes a bit of thought for me. Then I realized that the meat is added to the other filling ingredients "RAW". Oh no! What if the meat doesn't cook all the way. I debated for quite some time as to whether to just pre-cook the ingredients and then just cook entire Pastie for less time maybe at a higher temp.  In the end I decided to suck it up and go with the recipe full on! To me, that's what SRC is...sure, tweak here and there if I have no choice, but otherwise I really try to stay true to the recipe or else find another one to make. I also had to figure out what in the world a "Swede" was...other than someone from Switzerland. Google told me it was a rutabaga so that's what I got.

Now, I made this and it was good, but I think I did some things wrong so I don't think it was as yummy as Karens looked. I will try again though. For one, I think my dough was too dry. It didn't seem like it at the time but as I rolled it out I could tell it was going to be trouble. I managed to make it work (also realizing that in that distraction I forgot to brush the edges before sealing). The inside cooked through but everything seemed dry (could be the cut of meat I used...I just used stew meat because the other cuts were more than I could spend. It could have also been that I didn't add enough water to the dough). Other than that...the flavor was really good and I would totally make this again. Because of the "dryness", I actually made a beef gravy that we poured over the top and that really helped. There were NO leftovers so that should be a good sign. Thank you Karen for posting a recipe that for this American challenged me and I really enjoyed it!

Okay, on with the recipe.

2. Put butter, flour, shortening (white fat) and salt in large bowl or stand mixer. I used my mixer. Mix until mixture resembles small peas (fine breadcrumbs according to Karen). Add cold water until dough binds together..if too dry add more water. Wrap in plastic wrap and place in fridge for 30 minutes. I doubled the recipe to make 4 of these.

350g (about 1 lb. or so) beef, cut in to small slivers, almost shaved but not minced (she used rump roast, I used stew meat, and I just cut it somewhat small.
2 medium potatoes peeled and either shaved or very small dice
1/2 large Swede (rutabaga), peeled and shaved or finely diced
1 medium onion peeled and cut very finely
Salt and black pepper (I added thyme as well) 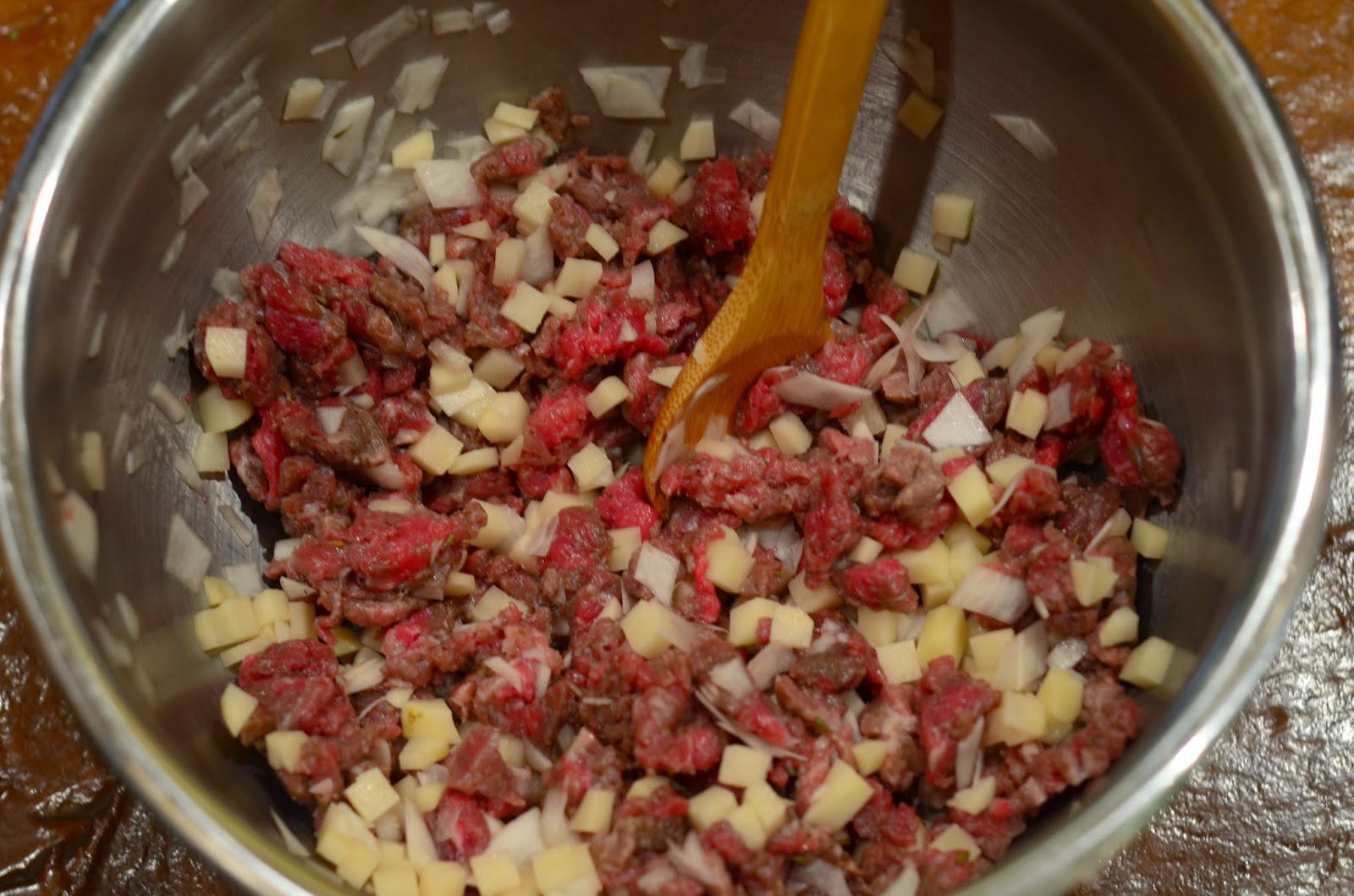 1. Combine all ingredients together. She suggests using lots of pepper. I added thyme to mine as well

2. Divide filling mixture up between crusts placing mixture to one side of circle but not to the edge. 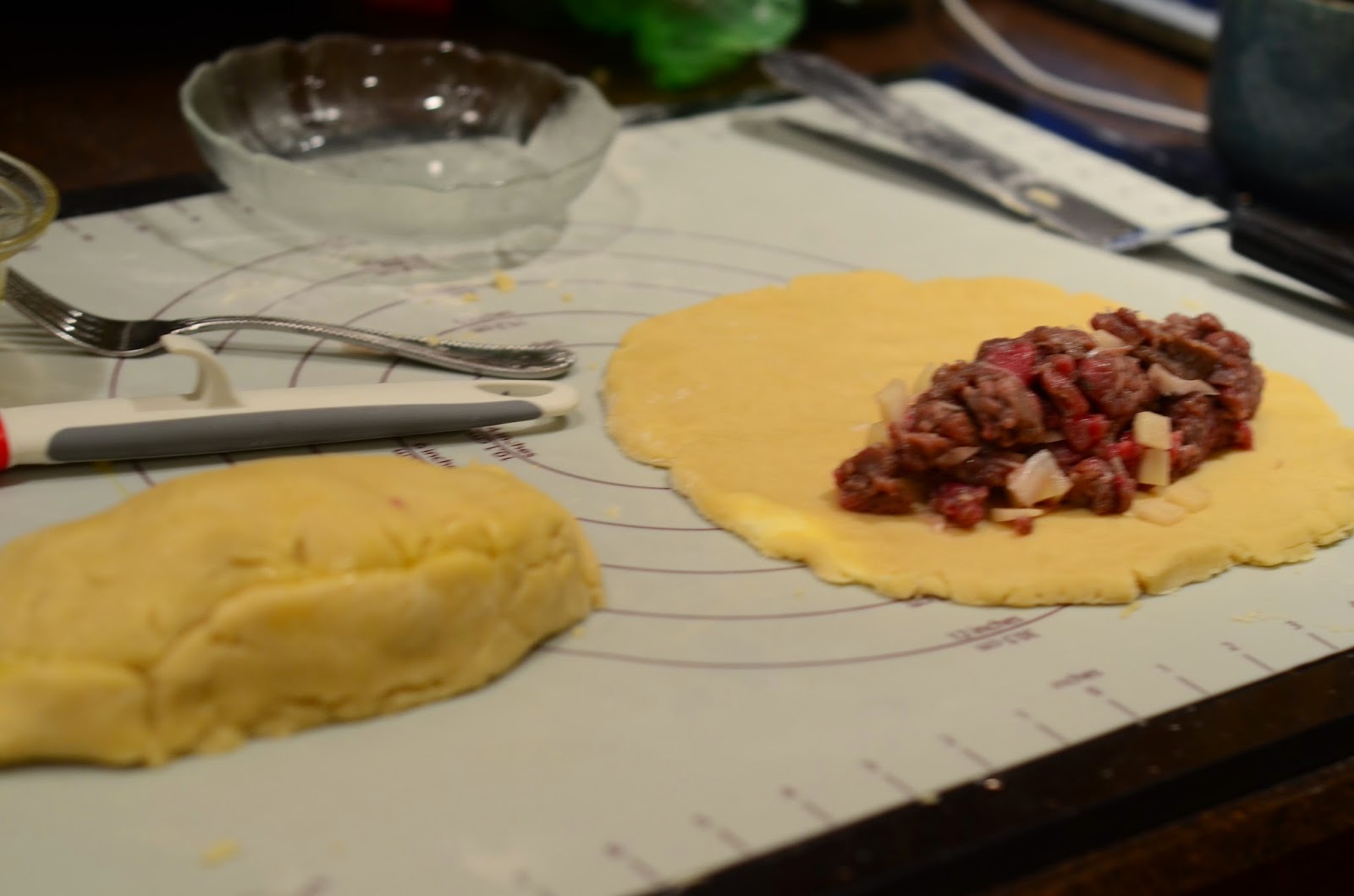 3. Brush edge of pastry with egg and then fold in half so edges meet. Now, if you were Karen, your pastry would be beautifully crimped, mine were not. I was just praying they'd stay together. Brush outsides with remaining egg. Place on a greased  baking sheet.

4. Bake at 450 for about 20 minutes then lower oven temp to 160c, which I did about 325f for another 40 minutes. This is what will ensure that the meat cooks all the way through. Smaller ones will take less time. Eat hot or cold.

Then like I said, because it was a bit dry, I made a beef gravy to pour over the top. No picture with the gravy since that didn't look very pretty. 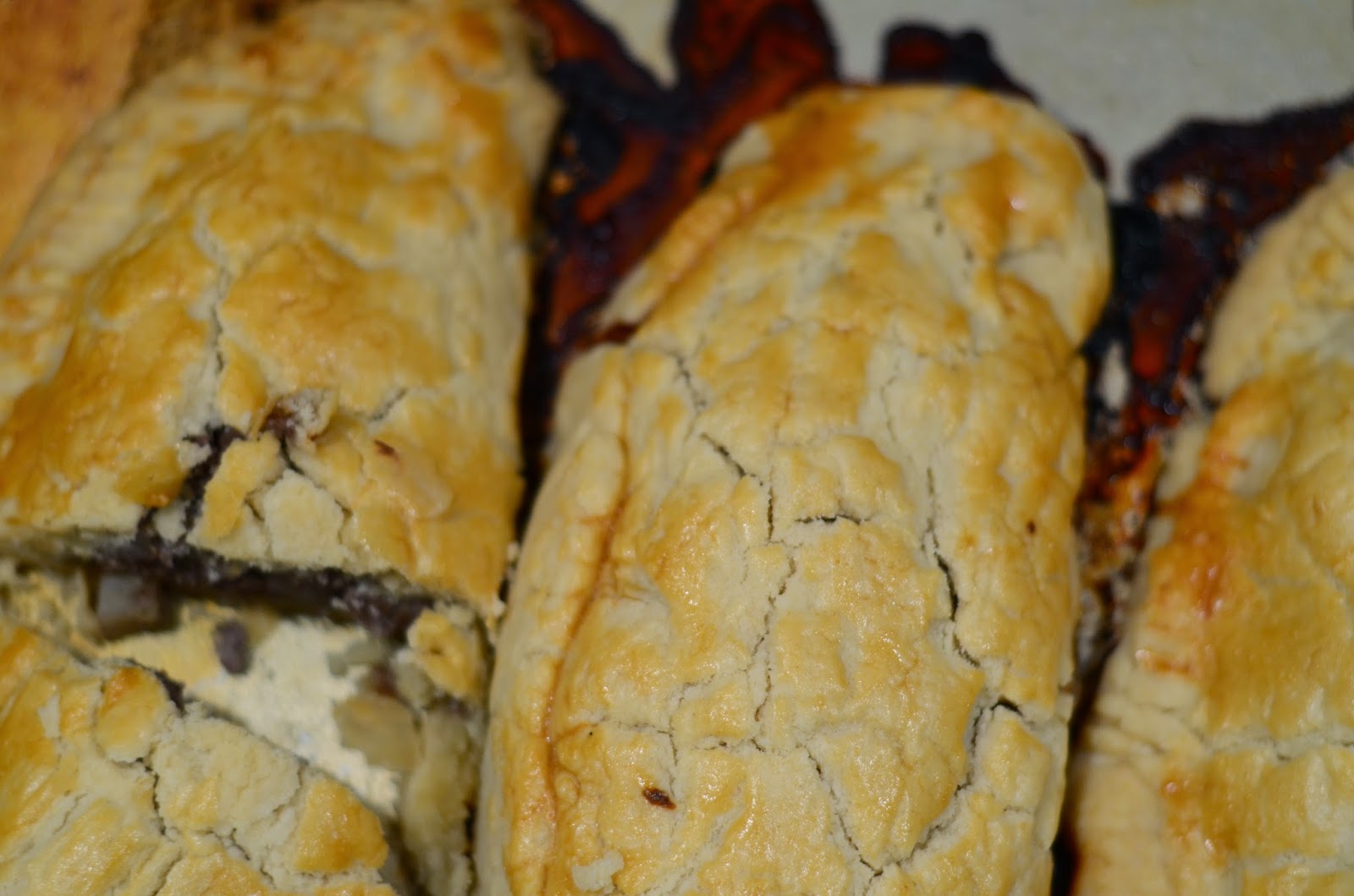