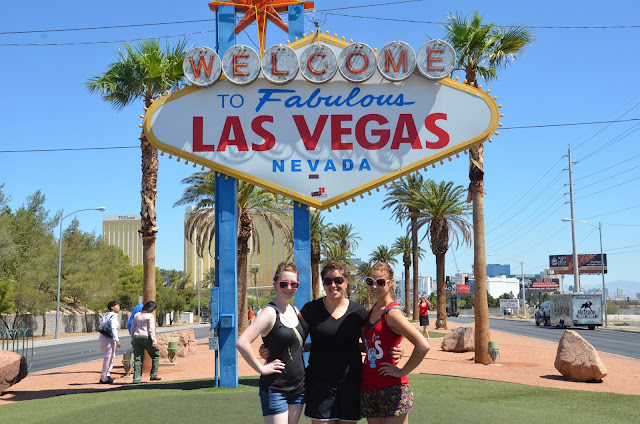 (We completely forgot about taking a picture when we arrived...this was the day we left)

Last November was our Kaitlynn's 16th birthday. We thought it would be fun to send her, a friend and myself away for a few nights. We told her she could choose a city of her choice....she chose New York...we said "pick again". We would have loved to have gone to New York, but that would be a spendy trip. In the end we chose Las Vegas. After talking to many friends and deciding that there was plenty to do there that didn't involve gambling or questionable activity we started making plans. 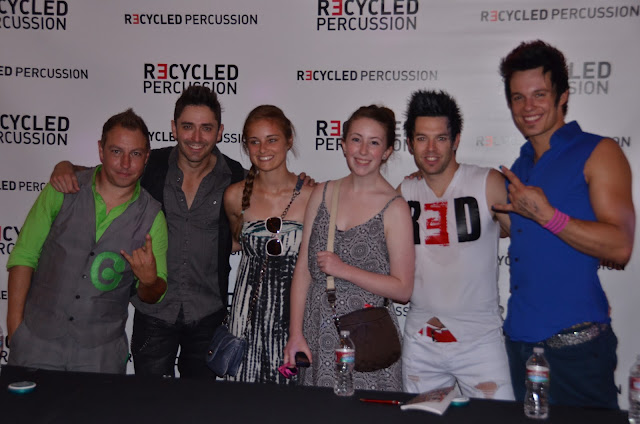 (The group Recycled Percussion...Kait was not too thrilled she wasn't looking at the camera)

We decided to go in June (yes, I know...it's hot in June) because that was really the only month there wasn't something going on. We began planning early, looking around online for rates, hotels, things to do. Kait's friends' mom and stepdad have a timeshare at the Wyndham Grand Desert and were VERY gracious and let us use it during our stay. The girls spent some time online thinking of things they might want to do and see. 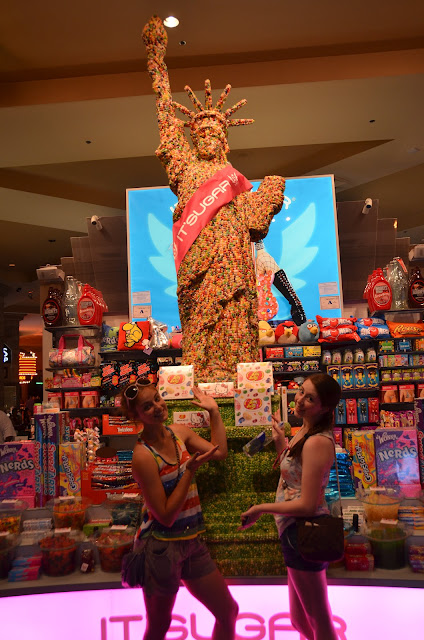 (inside New York New York...made entirely out of Jelly Beans)

I picked the brains of friends who had gone before to get ideas of what to do. The biggest question was do we rent a car or just use public transportation. Most people said they used public transportation or just walked everywhere. In the beginning I was completely opposed to renting a car. Me + Car + Big, unfamiliar city = in my mind, disaster. However, in the end I caved and we rented one. I even humbly admitted to my hubby that he was right and I was glad we did and can I recommend if you go, you do so as well. 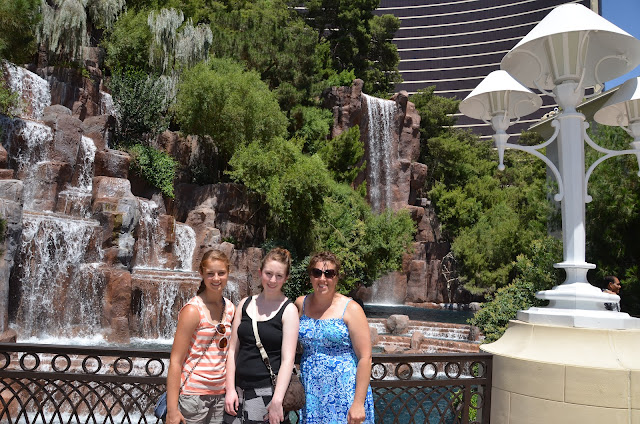 (Outside one of the hotels)

The other thing was that our finances weren't in abundance so we wanted to make the most of our money. Here are a few things that helped us.

We were there for 2 full days and 2 half days. When we arrived we quickly found our baggage and made our way to the rental car location. We were set to have a compact car but there weren't any available (hellooo..how does that even happen...don't answer that), so they upgraded us. We got a very nice Ford Fusion and off we went. We had no problem navigating our way to the resort and got ourselves checked in. The room was small with one bedroom, but perfect for the three of us. We went to dinner then over to Walmart to buy some food. 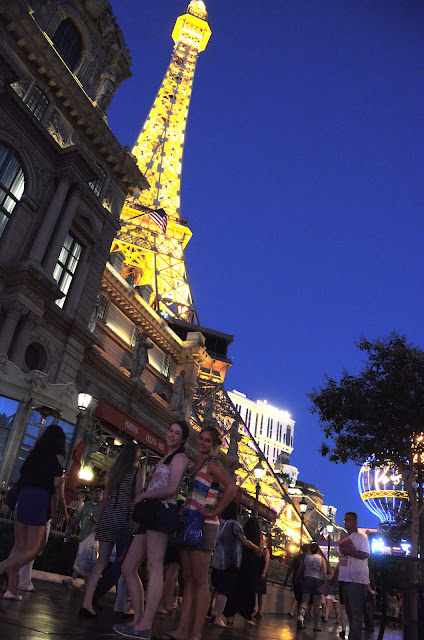 
That first night we decided to be brave and drive down the strip...that may not seem brave to you, but to me, it was VERY brave...I mean it was after dark, I'd never been on the strip and I was driving AND wanting to see the sights (which isn't entirely possible). We did it...Kait took pics and video and we had a really fun time. Windows down, music playing, camera flash flashing...oops, sorry people all around us..(C: 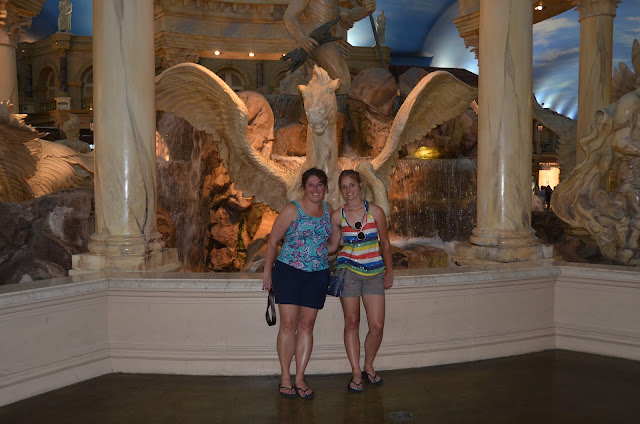 Kait is Miss Organized so when we returned to the hotel she laid out the plan for the week...this was after all her trip so I let her run with it. I was the driver and photographer, she was the planner.

The first morning we decided to head to the resorts pool (smaller than the pictures showed but still nice). This was actually the only time we made it to the pool. I was surprised at how early people had cans of beer or other alcohol in their hands. After about an hour we headed back to the room to change, eat something and head to the strip. Now that I think about it, I'm not sure what we did when and what day. One key was to not try and do the strip in one day. We broke it up in two day chunks, knowing what events or activities we wanted to do and saw that chunk of the strip on that day. When they say the blocks are long, they aren't kidding. On Tuesday we did A LOT of walking...we underestimated the distance between two places, but we were fine...we took advantage of walking through hotels to get cooled off before heading back outside...our feet sure were sore though by the end of the day (we did not wear appropriate walking shoes). 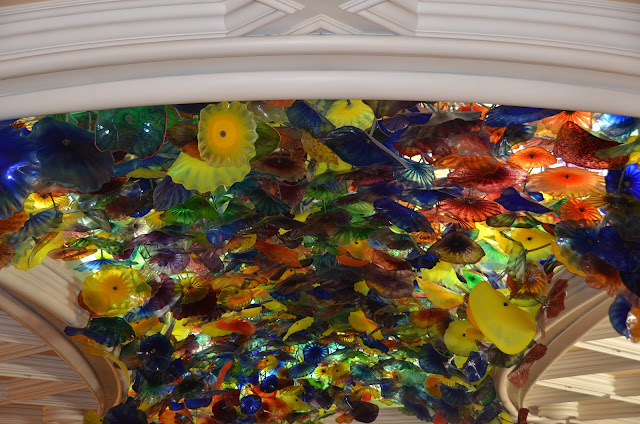 (These were made of blown glass..the artist is a NW native..Conservatory at Bellagio)


The hotels are spectacular with their architecture and individual uniqueness. Each one had it's own mini-mall and most of the times there weren't too many repeats of shops. We spent a lot of time just enjoying the scenery. Yes, you usually have to walk through the casino's to get anywhere but it was fine. We were impressed with how clean everything was, and because we did most of our stuff during the day and mid-evening it wasn't very "smoky" or "trashy". We did realize that there were a few things we did miss seeing but that was okay, they weren't the majors.

Here are some of the  things we did:

There really is so much to do and see. We had an agenda but just enjoyed ourselves and didn't let ourselves feel rushed. I'll post a few pictures and if you have any specific questions just comment. I can't remember everything. 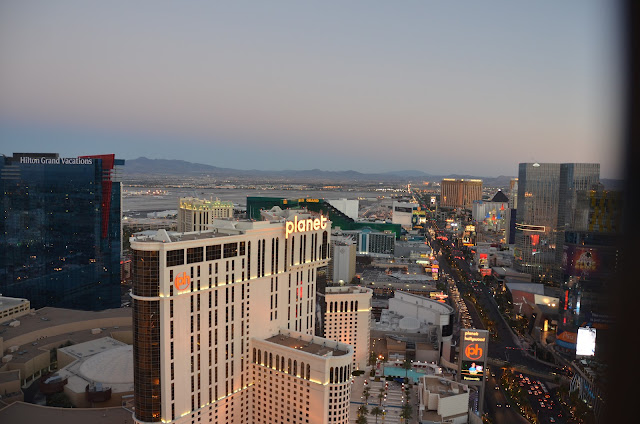 (At the top of the Eiffel Tower)

One thing I'll say is....I'm so glad I live in the Pacific Northwest. It was so nice to return to beautiful green landscaping!