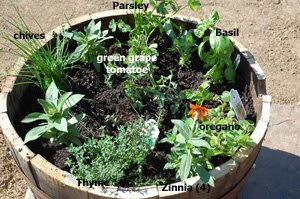 Life is getting busy. Isn't it summer? Shouldn't it slow down? I think so! But......not in our house. Not in our life. Things actually tend to get a bit busier. From this weekend on we have 8 soccer tournaments from now to August 22. The other weekends include a fundraiser and other things!! Holy Smokes....I'm tired already! What a great weekend we had. Saturday, Kat had the opportunity to play in a high school soccer scrimmage tournament (she's just finishing up 7th grade). They played three 40 minute games. We know the high school soccer coach and he asked her if she wanted to play. She was honored and nervous, which is understandable. She did so well. There is no way you would have known she was not in high school . She played amazingly well and her size is that of a high schooler. 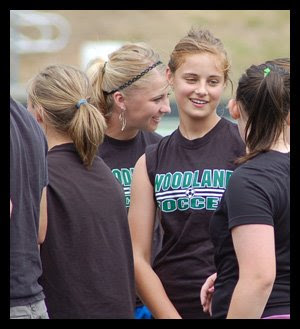 I have such an amazing 13 year old. 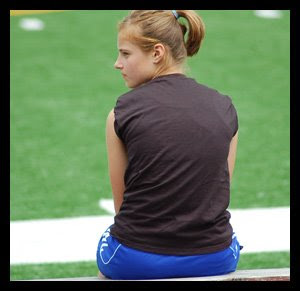 hanging on the sidelines, waiting to play. 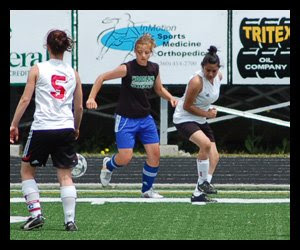 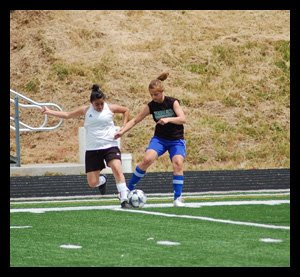 looking at her, you wouldn't know that she wasn't a high schooler. She's so tall, and played as well as many of the older girls out there. We were so proud of her.
After her games we met some of our young adults at a local park and played a few games of bocce ball. Then it was back to our house for a BBQ and playing the wii. They are such a great group. I put together the filling for my chicken and spinach stuffed shells (see recipe side bar) to make the next morning. We had a potluck after church and it's so much easier to prepare the filling the night before and then just have to stuff the shells in the morning. So, Sunday arrived and I got the shells put together, everyone ready and out the door with barely time to spare (good thing we live only 2 minutes from the church). After church we went to the potluck and just enjoyed being with friends. Hubby and I decided to take in a movie that evening. We went to see The Taking of Pelham 123. Not a good movie. It would have been good except that they dropped the "F" bomb way too much (for me, one time is too much and it was way more than once). I should have checked the reviews (my bad!). Afterwards it was home to hang with the girls before bed. The girls had stayed home from the potluck because it was for leaders and we let them have a friend over. They did great and had fun, but within 20 minutes 4 candle holders were broken. Three were on my window sills and they shut the blinds, not realizing the windows were open. The wind blew and the candle holders went flying off the sills. Bummer. I loved those holders, but it was an accident. The other one broke when Kats head ran into a shelf and knocked the whole thing off the wall. Oh my!!! They went to their friends house while we went to the movie! Today we stayed home and got things done around here. Hubby mowed the property with the neighbors brush hog and the churches tractor (our property looks so much better when its mowed). I watered the soon to be lawn and the garden. Then cleaned house and did laundry. 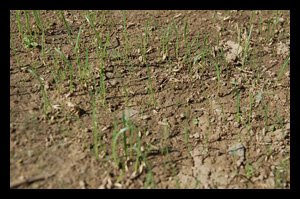 Can you see tiny blades of grass. Hopefully soon, there'll be a nice lush lawn.
Nan and I went to the local store and I bought 2 bags of potting soil and some thyme, oregano, parsley, chives, zinnia, foxglove and zinnia. I already had some basil and a green grape tomatoe plant. I planted all those in my half wine barrel. The wine barrel used to belong to my hubby's grandpa and he used to make hard cider in them. Do you know it still smells of hard cider and they've probably been unused for over 20 years. It's outside my kitchen door. I'm so excited to use fresh herbs this summer. I cannot for the life of me find a red bell pepper plant. I found a yellow one. All the other peppers are hot peppers. I also missed getting potatoes. None of my local town sources have any. What a bummer. Oh I also bought some tomatoe cages....finally. 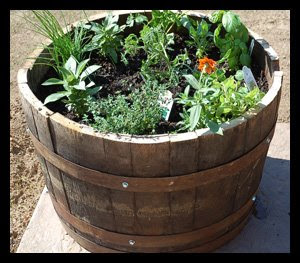 I love this planter. I've always loved these, but this one even more, because it belonged to my hubby's grandpa.
A few of things I planted last Monday are starting to come up. I may have some lettuce and radishes after all. My beets and carrots still are not cooperating. I'm a bit frustrated because I really wanted to try the ones I had. I'll keep trying till they come up or I run out of seeds. Tomorrow I hope to weed eat where the brush hog missed and also spray some annoying weeds. Also weed the garden, which seems to be never ending. Our towns local celebration is this weekend and we hope to take in a little bit of it. There will be fireworks Thursday night and we like to go to the parade on Saturday. Kat has a soccer game Saturday at 2:00 and is excited to be able to go to the parade before! The following weekend is the beginning of our week long fireworks fundraiser. That is a totally fun, and draining week where we make decent money for the youth group. Oh, my...how could I forget putting up strawberries. Several of the local ones were very sour, but I found some today at our local nursery that were sweet and $14.00 a flat (the cheapest I could find). I'll make jam and then slice and freeze the rest. That's happening Thursday. The girls have finished up school and are doing a bit of prep for the CAT tests which should arrive sometime around the 3rd of July. Soooo....I'm sure I'll do some more posting this week, but that's a rundown of life here on the ole' property! With Joy UNquenchable, 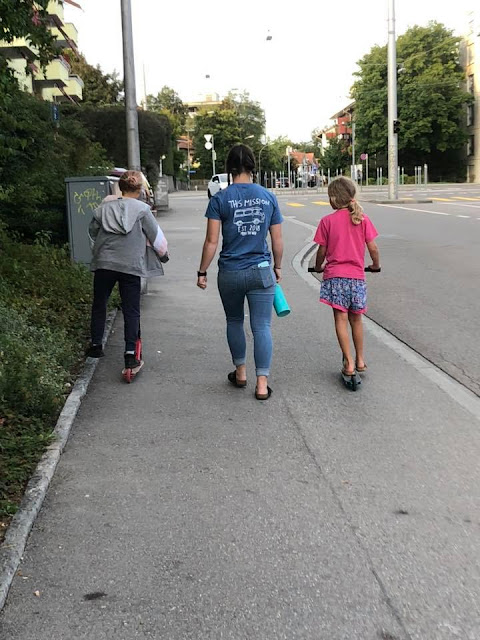 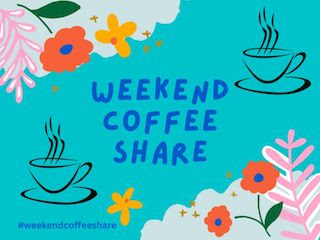