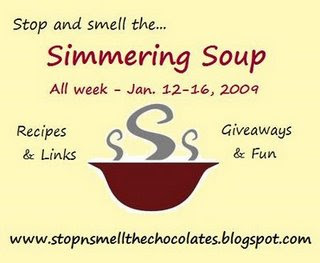 It's Simmering Soup week at Stop and Smell the Chocolates so head on over there and see what's being cooked up.
I love soups and always look forward to weather that makes them even more appealing. I have several more recipes I'll share as the week goes by.
The other day I put together a yummy ham and bean soup. For once I didn't follow a recipe but instead put in things that I thought would be good with beans.
I bought a 16oz. bag of dried beans. They contained such a variety of beans that I just couldn't pass it up. I also bought a package of already cooked and cubed ham.
In a large soup pan place bag of beans (I used half a bag). cover with 4-6 cups of water and add 1-2 chicken bouillon cubes. Cook about 1 hour or until beans are beginning to become tender. Add chopped onion, chopped carrot, cubed potatoes at this point and cook until tender. At the end had a few handfuls of chopped spinach and ham cubes (if using pre-cooked ham), otherwise add ham at the beginning. The only other seasonings I added were some pepper and I topped it with parmesan cheese once it was in the bowl and ready to serve. 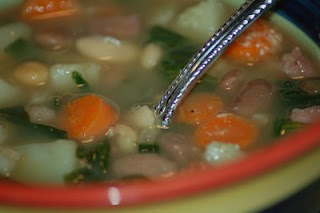 Serve with crusty buttered bread. I served it with flat bread that I warmed up.
With Joy UNquenchable, 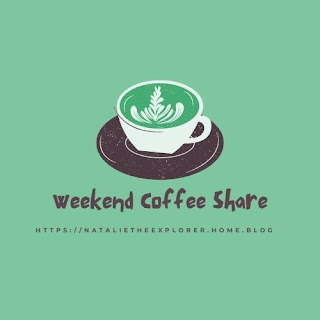