Kitchen Tip Tuesday: kids in the kitchen and whatever else I come up with 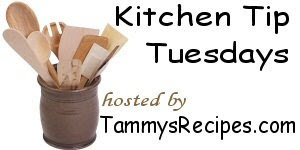 Yesterday the girls and I were homebound due to the fact that we only had one vehicle. So lots of time was spent in the kitchen.
I love letting my girls have freedom in the kitchen. My oldest loves to make smoothies and cookies and my youngest loves to use her Gooseberry Patch Cookbook. Though most of the recipes in there aren't healthy, I'll let her make things now and then. Eventually we'll find ways to make them healthier. 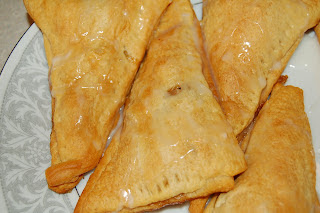 Nan made these surprisingly yummy apple turnovers. All I did was peel and core the apples.

Crescent Apple Turnovers
(Printable Recipe)
3 apples, peeled, cored and diced 1 c. brown sugar packed 3 tbs. all purpose flour 3/4 tsp. cinnamon 1/4 tsp. nutmeg 2 tubes crescent rolls 2 tbs. milk 3/4 c. powdered sugar
Mix diced apples, brown sugar, flour, cinnamon and nutmeg. Separate crescent rolls and place half of them on an ungreased baking sheet. Spoon 1 to 2 Tbs. of apple mixture in center of each crescent roll. Top with another triangle of dough. Seal edges of dough together using a fork to crimp. Bake at 350 degrees for 12 to 15 minutes. Whisk milk and powdered sugar together until smooth. Drizzle glaze over each turnover while still hot.
We also made some homemade rolls to go with our sticky chicken. I really didn't want all those rolls sitting around the house (I have no self control), so we took half of them to the neighbors to share. Last week NAN wanted to make a cake while she had a friend over. We made the cake and sent half of it home with the friend. With my cookie dough, I'll make a dozen, maybe less and then make balls of dough and freeze them. This way when we want just a few cookies, we pop a few balls of dough into the oven. I often will not make desserts unless we are going somewhere or having company...I know that probably sounds like I think my family is worth the dessert, but that's not true....we don't want all those desserts just sitting around the house waiting for us to pig out on. We have plenty of goodies on our own.
I recently purchased some Odwalla Superfood from Costco. It's yummy and Kat uses it in her smoothies. We like to just drink it too, but it'd be gone in 2 days if I let her just drink it plain, so I encouraged her to mix it with a bit of natural apple juice. This makes it go a lot further and it still tastes great.
So let those kids loose in the kitchen. Find ways to cook healthier. Don't hog all your goodies for yourself. Give some away. You bless someone else and you get rid of some temptation!!
Email Post
Labels: Kitchen tip tuesday