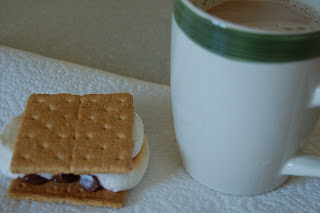 Yesterday I actually made an full meal. I love to cook and love cooking meals for my family but lately two or all of us have been out of town or we've had other things going on and a full meal just isn't possible. Let's just say that by the end of the "Crashed Crash Potatoes" preparation, I felt like I needed the contents of the photo at the left. No joke. I love trying new things but hate when they don't turn out right. And this had me worried. I knew I was going to make Salmon, asparagus and potatoes. I remembered that Ree at Pioneer Woman posted a recipe for Crash Hot Potatoes that looked amazing. And she had gotten the recipe from a gal in Australia. I had the right potatoes so I thought I'd give it a try.

But first.....the asparagus did turn out amazing. I cooked it in a pan with some olive oil and a little butter. Hubby likes to season it himself, and honestly, it didn't need more seasoning. 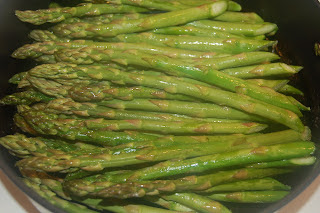 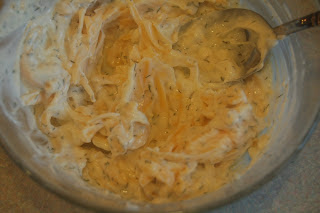 A yummy salmon topping is so simple: Some mayo, dill weed, garlic powder, cheddar cheese, parmesan cheese and you could use a little mustard if you wanted. I'd use a dijon. Anyways, mix up desired amount and when salmon is just about done. Spread this on top and place back in the oven till cheese melts. 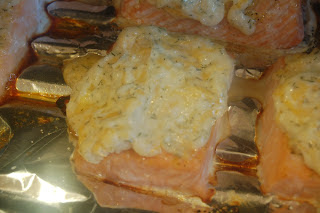 Salmon turned out yummy and amazing!!
Now on to the potatoes. They are super easy. Baby red potatoes. I used both baby reds and baby dutch since that's what I had and I needed to use them. Olive oil, salt, pepper, and other desired seasonings. I used garlic powder and chives. Ree used Rosemary...I don't' like Rosemary.
Boil the potatoes until they are tender...my first mistake was that I don't think I cooked them long enough. So I ended up nuking some of them.
Once they're boiled you place them on an oiled cooking sheet. Then taking a potato masher (my second mistake...I couldn't find a potato masher...so I tried a glass, a ricer and a fork...oh don't forget the beater, and some big fork like contraption that I found in the kitchen.) Then you "smash" lightly the potato one way, and then turn it and smash the other way. Mine just were not cooperating. I said to myself "These Crash Potatoes have Crashed"! This is what they were looking like...I said "they're not as pretty as Ree's"! But I kept going.
Then you drizzle them or brush them with more olive oil and sprinkle on your seasonings. Go to her post for detailed directions and prettier pictures. 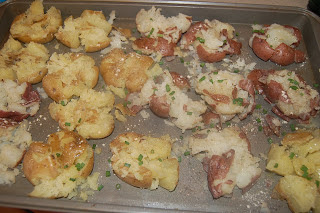 But, the end result, though not as pretty as hers...were yummy! They were crispy in all the right places and soft and tender in the middle. I will make them again...only with a potato masher and cooking them for the allotted time. Or maybe just cook them long enough. I ended up scoring them in a cross with a knife and then using a fork to mash them. I wish I'd taken a picture of all the utensils I tried. 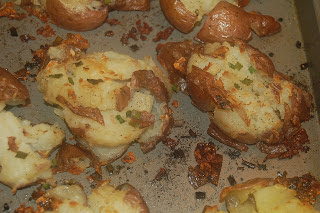 Everybody agreed these were great, so I'll definitely make them again. And I didn't tell anyone about all the trouble I had. My attitude was great. Probably because I had the music cranked.
With Joy UNquenchable,